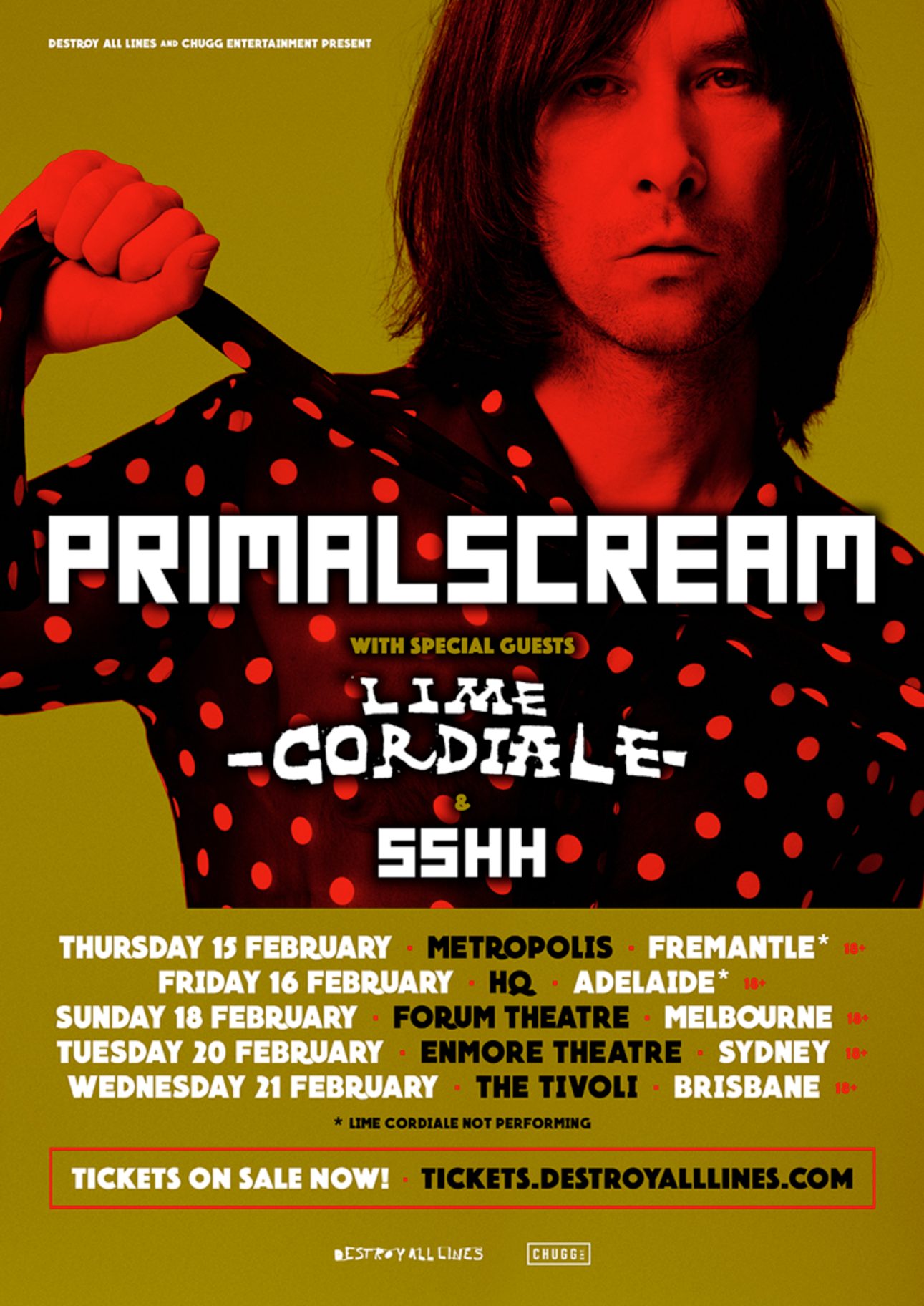 Fresh off the back of their debut album ‘Permanent Vacation’ which Beat Magazine called “engaging and eclectic and is certainly a record not to be missed”, LIME CORDIALE are primed to make 2018 a massive year and there is no better way to kick it off than been announced as national support for PRIMAL SCREAM. Brothers Louis and Oli Lembach are excited to say the least with Louis exclaiming “we are itching to get back on the road again and to be warming up the stage for a band of which we are long term fans of. It’s an absolute pleasure. Playing some big shows with some loyal Aussie Primal Scream fans is going to be a treat. We haven’t played our songs to an audience of this size before so it’ll be quite an experience for us. Hopefully they dig our stuff!”

Also joining this incredible bill is SSHH…a rare breed of band with comparisons ranging from Aphex Twin to The Sex Pistols, these guys are extreme. Fronted by the force of nature that is the singer Sshh Liguz, whose vocals have been described as a mixture of “Bowie, Siouxie Soux, Iggy Pop, Karen O & Robert Plant”, she’s a pint sized pocket rocket to be reckoned with. By her side is the man of the hour- Zak Starkey (Son of Ringo Starr), wielding his weapon of choice–a guitar–that takes your breath away and makes the hair on the back of your neck stand up on end in excitement. SSHH were recently described by NME as “a pelvis swinging slice of gnarly power-pop rock with vocals so saucy they make ketchup seem like mere water”.

Acid house hedonists, indie rock’n’rollers; PRIMAL SCREAM are a band who have built a 30 year career on the art of reinvention and they are bringing their incendiary live show back to Australia more powerful and engaged than ever.

Bobby Gillespie is the consummate rock & roll star. Willowy, wispy and radiating swagger, he struts around the stage, mic in hand like the genetically-engineered love child of Mick Jagger and Jim Morrison. His presence and ability to throw himself into a tune – spinning, sweating, hair plastered over his face, accompanied by trademark hand claps – still thrills crowds and propels PRIMAL SCREAM into a league of their own.

PRIMAL SCREAM will always say it with passion and energy and will be wowing Australian fans in February 2018 playing an all-encompassing greatest hit sets including tracks from their legendary 1991 album ‘Screamadelica’.

DEVILDRIVER To Release New Full-Length Album, Dealing With Demons I. Volume One of the Double Album Saga Drops October 9

Welcome to Rock Club 40!
We believe YOU'RE NEVER TOO OLD TO ROCK'N'ROLL so join us in proudly supporting all the great 'classic' musos who are still out there touring and making great new music!

Before ‘Jessie’s Girl,’ there was Zoot | My Rick Springfield crush: […] article on rockclub40.com explains a little more about the 24-song [...

We believe YOU'RE NEVER TOO OLD TO ROCK'N'ROLL! We're here to support 'classic rockers' in their new ventures. If you would like to contribute, feel free to get in touch.